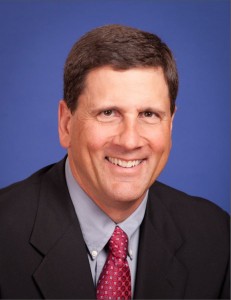 Michael C. Rock was born and raised in the southern tier of New York State. He is a graduate of  the University of Cincinnati with Bachelor of Science and Master of Education degrees in  Education. While at UC, he played varsity football and was the team captain for two years.

After graduation, he taught school for four years before joining Nationwide Insurance. His
insurance career began in Cincinnati as an agent and then he was promoted to several sales
management positions before returning to agency work in Williamsburg in 1994. He and his family lived in Cincinnati, Ohio, Springfield, Ohio, Springfield, Ohio, Columbus, Ohio, Guilford, CT and Bedford, NH while working in sales management for Nationwide. He has qualified for numerous sales achievement awards both as an agent and as a sales manager. His agency is in Williamsburg and employs three people.

Mike and his wife, Cheryl, have been married for 31 years. They have two grown daughters. Erin is an RN at Riverside Regional Medical Center and Lisa is an elementary teacher for the Newport News Public Schools. The office mascot is a silky terrier named Maddi.

Mike has served with the United Way of Greater Williamsburg, is a past Board Member of
Meals on Wheels, Past President of the Jamestown High School Athletic Boosters, is a member of the Greater Williamsburg Chamber Alliance since 1994 and has served on the Membership Committee for the Chamber. He is currently a Board Member of Blooms That Brighten and the Williamsburg Kiwanis Club. Mike is serving as the Co-Chair of the Shrimp Feast for the Kiwanis Club this year.

Mike leads a very active life style! His activities include bicycling, swimming and an occasional triathlon relay with his daughters. On summer weekends, you can fine Mike and Cheryl enjoying their boat on the James River.